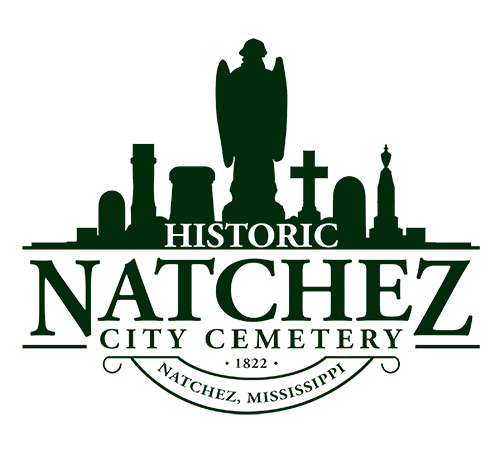 The story of Natchez involves mystery, grandeur and tragedy. There is no better place to learn about this history than the Natchez City Cemetery. Its occupants have rested high above the bluffs of the mighty Mississippi River since 1822. The view of the river, especially at sunset, is breath-taking, casting long shadows of the majestic oaks that line its main drive. A tour of the Natchez City Cemetery, however, is not just about stories and the people buried there. You will see what makes the entire cemetery a virtual work of art. Beautiful ironwork fences and benches can be viewed, representative of 19th and early 20th century ironwork produced in around the country. The cemetery contains many impressive monuments created by famous and talented marble workers such as Edwin Lyon and Robert Rawes. They are credited with many of the sculptured monuments erected in the antebellum era.